While one of the main concerns for parents with children sports is safety, each year millions of student athletes are injured while playing high-school sports. Clay Target shooting however remains one of the safest high school activities nationwide.

According to the latest statistics from the Center for Injury Research & Policy, boys’ football tops the list of most dangerous high-school sports with over 3 million injuries estimated nationwide each year. Football is followed by both girls’ and boys’ soccer, with about an estimated million injuries for each.

What about injuries in Clay Target shooting? None.

Since the High School Clay Target League’s inception in 2008, there have been no recorded injuries to athletes, coaches, or spectators. Ever.

“Safety is our number one priority for the League” said USA High School Clay Target League® Executive Director, Jim Sable. “All student athletes must earn a firearm safety certificate, wear protective eye and hearing gear, abide to our strict policies and procedures, and every single practice or competition event requires both a Range Safety Officer and a coach to supervise student athletes.”

Perfection has its privileges. 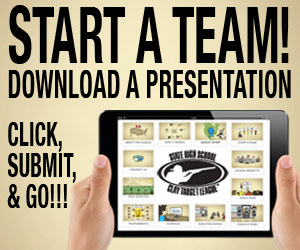